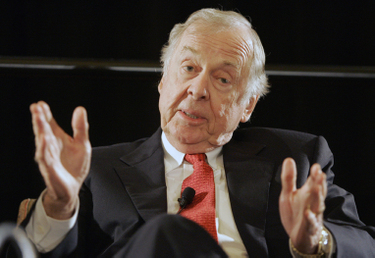 Assuming the link works for you, I invite you to go read T. Boone Pickens’ piece in the WSJ today, headlined, "My Plan to Escape the Grip of Foreign Oil."

Now I know what you’re thinking: Mr. Pickens being an oil man from way back, his plan for independence is likely to be as simple and monolithic as Joe Wilson‘s — specifically, drill.

But while he says, way down in the piece, "Drilling in the outer continental shelf should be considered as well," it plays less of a role in his vision than it does in the Energy Party‘s, if that. It comes after he urges us to "explore all avenues and every energy alternative, from more R&D into batteries and fuel cells to development of solar, ethanol and biomass to more conservation." 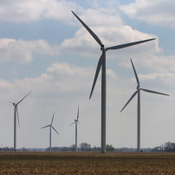 All of that follows his exploration of his main idea, which is to convert a large portion of our energy
generation to wind power, which he lauds by saying "Wind is 100% domestic, it is 100% renewable and it is 100% clean." He would use natural gas thereby freed up from power generation to run our vehicles.

All that is great, but I think the best passage in the piece is when he explains why we must take extraordinary measures to reduce our dependence on foreign oil. I leave you with that excerpt:

Let me share a few facts: Each year we import more and more oil. In 1973, the year of the infamous oil embargo, the United States imported about 24% of our oil. In 1990, at the start of the first Gulf War, this had climbed to 42%. Today, we import almost 70% of our oil.
This is a staggering number, particularly for a country that consumes oil the way we do. The U.S. uses nearly a quarter of the world’s oil, with just 4% of the population and 3% of the world’s reserves. This year, we will spend almost $700 billion on imported oil, which is more than four times the annual cost of our current war in Iraq.
In fact, if we don’t do anything about this problem, over the next 10 years we will spend around $10 trillion importing foreign oil. That is $10 trillion leaving the U.S. and going to foreign nations, making it what I certainly believe will be the single largest transfer of wealth in human history…