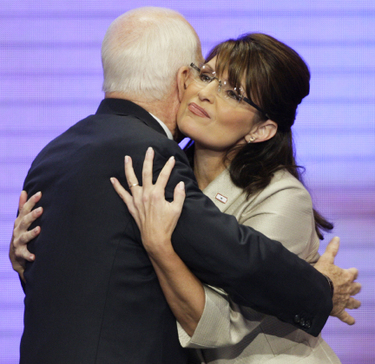 Yes, I know what you were thinking when John McCain and Sarah Palin hugged on stage last night: Does this mean she’s got Bush cooties now?

You say it didn’t strike you as worth thinking about? Then you’re just not trying. Someone on PBS last night — I forget which of the talking heads — DID see it as fraught with meaning. It was noted that Walter Mondale scrupulously avoided hugging Geraldine Ferraro during the 1984 campaign. The point being, apparently, look how far we’ve come, yadda-yadda…

Here’s what I was thinking: I noted the expression on Gov. Palin’s face. It seemed to say, "Yeah, OK, I’ve got to hug this guy; it’s expected. But I don’t have to like it. And don’t get any ideas, buster…"

Or something along those lines. I admit, my ability to read minds isn’t perfect. But I’m pretty sure she wasn’t delighted.

In any case, it’s an expression I haven’t seen on her face at any other time, so far.