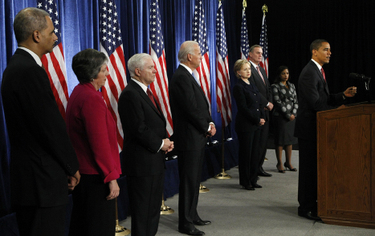 Sorry I haven’t posted today — actually, I DID post something, but it blew up when I hit SAVE, and I’m not about to type it again, so there.

Anyway, I thought I’d put up something that would provide a chance for y’all to discuss Obama’s National Security team. I’ve already expressed my concern about Hillary Clinton, and I don’t have a lot to say about the rest. I like that Robert Gates is staying. I’ve always liked Gates. (See my Nov. 10, 2006, column, "The return of the professional")I thought he was a great pick to rescue our military from the screw-ups of Rumsfeld, and he’s generally lived up to that.

But the Gates choice speaks to a larger issue, which is continuity of policy. Obama spoke of his "pragmatism about the use of power and my sense of purpose about America’s role as a leader in the world." Which speaks to something I like about him, and appreciate. I hoped it would have been like this, and he’s not disappointing me.

Some of his most ardent supporters are likely to be disappointed by the very things that reassure me about Obama and foreign policy. But personally, I don’t think Obama’s going to blow Iraq just to please them. He’s fortunate that the Surge (which he was wrong to oppose) has produced a situation in which an ordered withdrawal of American troops is actually advisable, and no longer reckless. I think he’ll be careful to do it in a rational manner, according to conditions on the ground. I think he’ll see the things that Tom Friedman sees, and wrote about in his Sunday column:

In the last year, though, the U.S. troop surge and the backlash from
moderate Iraqi Sunnis against al-Qaida and Iraqi Shiites against
pro-Iranian extremists have brought a new measure of stability to Iraq.
There is now, for the first time, a chance — still only a chance — that
a reasonably stable democratizing government, though no doubt corrupt
in places, can take root in the Iraqi political space.

That is
the Iraq that Obama is inheriting. It is an Iraq where we have to begin
drawing down our troops — because the occupation has gone on too long
and because we have now committed to do so by treaty — but it is also
an Iraq that has the potential to eventually tilt the Arab-Muslim world
in a different direction.

I’m sure that Obama, whatever he said
during the campaign, will play this smart. He has to avoid giving Iraqi
leaders the feeling that Bush did — that he’ll wait forever for them to
sort out their politics — while also not suggesting that he is leaving
tomorrow, so they all start stockpiling weapons.

If he can pull
this off, and help that decent Iraq take root, Obama and the Democrats
could not only end the Iraq war but salvage something positive from it.
Nothing would do more to enhance the Democratic Party’s national
security credentials than that.

The really miraculous thing that Friedman notes is a sign that an independent judiciary is emerging in Iraq: The high court came down on a member of parliament for trying to persecute a government official for visiting Israel. This is a startling development, almost miraculous, really. I remember several years back listening to Lindsey Graham talk about how very far Iraq was from developing the institutions that support the rule of law. Graham believed we needed to stay there; I believed we needed to stay there, but contemplating how long it would take for such institutional changes to take hold was extremely discouraging.

Now we’re seeing such encouraging signs as this, which is actually as important as the reduction of violence. As Friedman says, "It’s a reminder of the most important reason for the Iraq war: to try
to collaborate with Iraqis to build progressive politics and rule of
law in the heart of the Arab-Muslim world, a region that stands out for
its lack of consensual politics and independent judiciaries." That’s why Friedman was for the Iraq War, and it’s why I was, too. But I didn’t think something like this would happen so fast. As you’ll recall from what I wrote the week we invaded, I really didn’t expect us to be talking realistically about withdrawal this early in the process. But now we can — as long as we don’t screw it up. And keeping Gates at Defense is an important way of maintaining the continuity needed to avoid screwing it up.

I realize that doesn’t fit the hopes of those who thought an Obama administration’s policies would be as different from the Bush administration’s as night and day, and Obama’s going to have to do and say some things to keep those people happy, but I suspect he can do that and still chart a wise course. To them, "continuity" is probably a cuss word. But it’s the wise course, and it will be respected abroad. More than that, it’s what will work.

As David Brooks wrote today, in a column headlined "Continuity We Can Believe In:"

Over the past year, Defense Secretary Robert Gates has delivered a
series of remarkable speeches echoing and advancing Rice’s themes. “In
recent years, the lines separating war, peace, diplomacy and
development have become more blurred and no longer fit the neat
organizational charts of the 20th century,” he said in Washington in July.

Gates does not talk about spreading democracy, at least in the short
run. He talks about using integrated federal agencies to help locals
improve the quality and responsiveness of governments in trouble spots
around the world.

He has developed a way of talking about
security and foreign policy that is now the lingua franca in government
and think-tank circles. It owes a lot to the lessons of
counterinsurgency and uses phrases like “full spectrum operations” to
describe multidisciplinary security and development campaigns….

During the campaign, Barack Obama embraced Gates’s language. During his press conference on Monday, he used all the right code words, speaking of integrating and rebalancing the nation’s foreign policy capacities. He nominated Hillary Clinton and James Jones, who have been champions of this approach, and retained Gates. Their cooperation on an integrated strategy might prevent some of the perennial feuding between the Pentagon, Foggy Bottom and the National Security Council.

Some of you might not be seeing the change you believe in. But I’m already seeing continuity I can believe in.

And here’s the change that we WILL see, and that will matter: I think Obama can sell this policies, and make them work, better than Bush did. He was a lousy salesman. As I wrote about the Surge when I first heard about it, it was the right strategy, but Bush was the wrong guy to have selling it.

Obama’s the right guy. This is going to be interesting, and I hope gratifying, to watch.