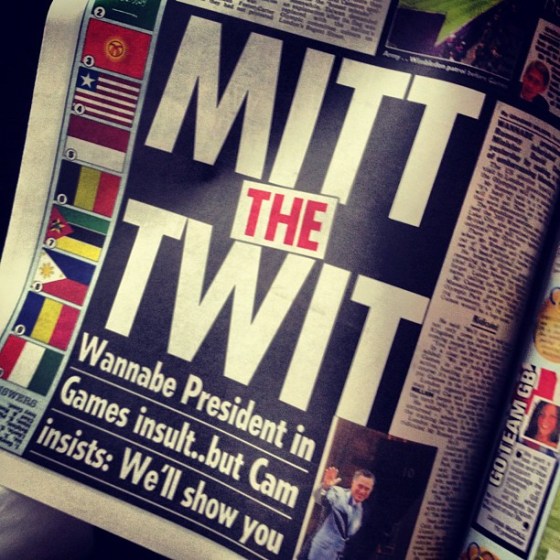 Well, you know how that awful Obama person went and insulted our Cousins across the water by dissing the Churchill bust?

Above was the result. That’s from The Sun. Very lively newspaper industry they still have over there. Here’s more on the subject.

Anyway, the White House has really, really been enjoying this. And and at least one of Romney’s likely supporters is highly dismayed:

As Charles Krauthammer, who is probably Obama’s most vitriolic foreign policy critic on the right, put it, Romney really didn’t have to do much more than show up for the trip to be a success. Instead, he opened his mouth and undermined both of his goals. Whatever the right might say about the Obama administration damaging the “special relationship” between the U.S. and U.K., Obama has never caused an incident like the one Romney did yesterday. As an exasperated Krauthammer remarked last night, “All Romney has to do, say nothing. It’s like a guy in the 100-meter dash. All he has to do is to finish, he doesn’t have to win. And instead, he tackles the guy in the lane next to him and ends up disqualified. I don’t get it.”

52 thoughts on “Nice job of repairing the ol’ Special Relationship there, Mitt. You trying to restart the War of 1812?”